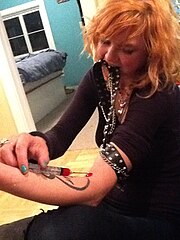 Once the most feared drug on the planet, so powerful it would scare away would be users, heroin is making a comeback. It is both strong and lethal.

Heroin, which has flourished in the nation’s big urban centers over the past few years, has been making an alarming comeback in the smaller cities and towns of New England. From quaint fishing villages on the Maine coast to the interior of the Great North Woods extending across Maine, New Hampshire and Vermont, there has been a sharp rise in the availability of the crystalline powder and in overdoses and deaths attributed to it. As reported in www.nytimes.com.

How bad is the issue in this area? Pretty bad. Here in Portland, better known for its laid-back vibe and lively waterfront, posters warn of the dangers of overdose. “Please,” they say: “Do Not Use Alone. Do a Tester Shot” and “Use the Recovery Position” (which is lying on one’s side to avoid choking on vomit). I can hardly imagine signs like these in my own town and I am a counselor for both in-class and online drug classes.

The city, like many others across the country, is experiencing “an inordinate number of heroin overdoses,” said Vern Malloch, assistant chief of the Portland Police Department. “We’ve got overdose deaths in the bathrooms of fast-food restaurants. This is an increase like we haven’t seen in many years.”

Heroin killed 21 people in Maine last year, three times as many as in 2011, according to the state’s Office of Substance Abuse and Mental Health Services. New Hampshire recorded 40 deaths from heroin overdoses last year, up from just 7 a decade ago. In Vermont, the Health Department reported that 914 people were treated for heroin abuse last year, up from 654 the year before, an increase of almost 40 percent.

One reason for the rise in heroin use is the restrictions on doctors in prescribing painkillers. The tightened supply of pain pills, and physical changes that made them harder to crush and snort for a quick high, have diverted many users to heroin, which is much cheaper and easier to get. Dr. Publicker, president of the Northern New England Society of Addiction Medicine, said that some doctors in the region had been overprescribing painkillers, which can be gateway drugs to heroin. A federal study in 2011 showed that the treatment admission rate for opiate addiction was higher in Maine, and New England, than elsewhere in the country, though communities everywhere are reporting problems.

“We had a bad epidemic, and now we have a worse epidemic,” Dr. Publicker said. “I’m treating 21-, 22-year-old pregnant women with intravenous heroin addiction.”

Yet the rise in heroin abuse here predated the restrictions on painkillers, leading some officials to blame the simple law of supply and demand. Distributors in New York see a wide-open market in northern New England, where law enforcement can be spotty and users are willing to pay premium prices. A $6 bag of heroin in New York City fetches $10 in southern New England but up to $30 or $40 in northern New England, law enforcement officials said. The dealer gets a tremendous profit margin, while the addict pays half of what he might have to shell out for a prescription painkiller.

“If the market is flooded with low-priced, high-grade heroin, a significant population is addicted,” Captain Tucker of Rutland said. “That’s the free market.”

Heroin is one of the most addictive drugs in the world. About a quarter of everyone who tries it becomes dependent on it. Users can quickly develop a tolerance, prompting them to seek more and more until the pursuit takes over their lives and, often, leads to ruin.

Theresa Dumond, 23, who lives on the streets of Portland, said she sells her body three times a day to support her heroin habit. She lost custody of her two young children about a year ago (“I can’t keep track”), and their father died.

“I’ve lost everything,” she said as she and a companion, Jason Lemay, 26, walked to an abandoned train tunnel, littered with old needles and trash, to shoot up. “The heroin numbs the pain and makes you not care about life,” she said.

Her only concern now is scoring more heroin. She pays no attention to food and sleeps where she is or in a shelter.

Once deep inside the train tunnel, she helped Mr. Lemay inject a needle into one of his legs — he had no good veins left in his arms — and then jabbed a needle into her own arm. “It’s the best feeling ever,” she said. “It’s the warm rush.” With more people becoming addicted, officials in New England are bracing for the likely consequences: more burglaries so addicts can support their habits and heavier demands on health, welfare and law enforcement services. Novice users are more likely to share needles, leading to an expected increase in infections like H.I.V. and hepatitis C.

Maine is the first state that has limited access to specific medications, including buprenorphine and methadone, that have been proven to be effective in treating addiction, a step taken to save money. Many here worry that such restrictions are likely to make things worse and lead to more fatalities.

For now, emergency responders are busier than ever.

Most of the heroin reaching New England originates in Colombia and comes through Mexico, federal law enforcement officials said. The number of seizures along the border jumped sixfold in 2011 from 2005. But enough is getting through to major distribution centers in the Northeast, including Philadelphia and New York, that it is flowing steadily into northern New England, often through Lowell, Lawrence and Holyoke, Mass. In May, six people were arrested in connection with a $3.3 million heroin ring in Springfield, Mass., and Holyoke, where investigators seized 45,000 single-dose bags.

The purity of the heroin varies widely, which law enforcement officers say is partly responsible for the increase in deaths, and bad batches have been reported throughout the region. Even an experienced user might not be prepared for the strength of a particular bag. And because heroin reaches the brain so quickly — and witnesses hesitate to call for help immediately — overdoses are often fatal.

Lourdes Watson-Carter, 34, who lived in a small town near here, had been a heroin addict for several years, according to her family and friends. They said her addiction led her to prostitute herself to pay for her next fix.

After her most recent term in prison, for drug trafficking, her friends and family thought she was clean. She was even preparing to go back to school in cosmetology and hairdressing and hoped she might regain custody of her young son.

But one night last month, Ms. Watson-Carter injected some very pure heroin, according to her father, Michael Watson, a retired Amtrak police officer, who lives in Maryland.

“She was taking the same amount she would usually take, but it was so concentrated and pure that she overdosed,” he said. By the time an ambulance arrived, she may have been brain dead; he received conflicting reports. She caught pneumonia a few days later and then died.

Her death was especially awful, her father said, because he thought she was finally turning her life around. “But I knew I was going to get that call someday,” he said. “You try to prepare yourself for it, and you think you can handle it. But you don’t handle it very well.”