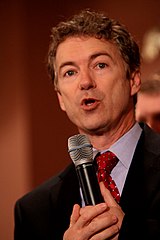 Love him or hate him, at least Rand Paul says what is on his mind. Unlike many politicians who preach only what their party leaders tell them to, Rand certainly beats to the drum of his own drummer, and for that I respect him.

Paul, the polarizing junior senator from Kentucky, has reignited the debate surrounding marijuana. He is on record with his belief that kids who smoke marijuana should not be sent to jail. A self-proclaimed libertarian and "constitutional conservative," Paul introduced a bill last week that would allow judges greater flexibility in assigning minimum sentences for drug offenders. As reported in www.policymic.com.

Paul doesn't support the legalization of marijuana, but thinks the current mandatory minimum sentences don’t fit the crime. Paul encourages people to abstain from drug use, including marijuana, but doesn't believe people should be labeled as criminals for petty offenses. Paul argues that citizens in their teens and twenties make a lot of mistakes, including drug usage, and that a poor decision shouldn't ruin their lives. I agree wholeheartedly.

The senator used Presidents George W. Bush and President Obama as examples of the overzealous drug laws that can destroy the potential of many of the millennial generation. Paul insists the presidents "got lucky" by not having to go jail for their drug use thanks to high-powered attorneys, but that poor inner-city kids do not have the same good fortune.

Marijuana is the most widely used narcotic with approximately 18 million users in the United States in 2011. According to the National Institute of Drug Abuse, "More teenagers are now current smokers of marijuana than of cigarettes." Marijuana usage has been on the rise since 2007, with Colorado becoming the first state to fully legalize the controversial substance.

What do you think? I support more drug classes and education.