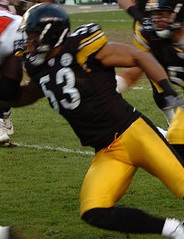 There is no good reason for driving under the influence of alcohol. As a counselor for both in-class and online alcohol classes my students often try to come up with reasons to justify drinking and driving. Of course it always comes back to your wife is pregnant and she needs to get to the hospital.

That is no excuse. Nor is the reason Pittsburgh Steelers’ linebacker Clark Haggans had.

In kind of a bizarre story, Haggans, a member of Pittsburgh's Super Bowl XL team - is serving a 48-hour jail sentence to be followed by seven days of work release for a DUI arrest. This as reported in www.behindthesteelcurtain.com

What's bizarre is his excuse. If there is one for driving under the influence, that is.

It's a tough situation, but one he is facing up to, nonetheless.  He claims that he and his wife were at a concert when Haggans received a call from the babysitter of the couple's 5-year-old daughter was having trouble breathing. His daughter is on medication for under developed lungs.

Haggans could not find his wife, so despite having been drinking, he got in his car and rushed him to tend to his daughter. En route, he was picked up for running a red light, as well as suspicion of DUI.

Officers actually escorted Haggans returned to his place to administer care to his daughter, where, at that point, he was cited for running a red light, speeding and suspicion of DUI.

While he takes full responsibility for his actions, the fact that this is not his first Dui arrest is troubling. He had a DUI arrest in Colorado in 2004.

I hope this time he takes a good Pennsylvania DUI class and decides that drinking alcohol is not part of his future.