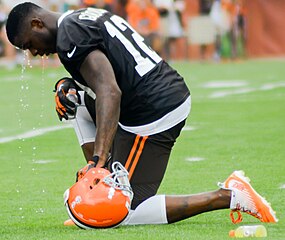 Should the National Football League (NFL) allow its players to use marijuana? Of course the drug remains illegal in many states, but what about the states where it has been legalized for medicinal purposes?

Players insist it helps keep them using and abusing prescription pain medication. What about players who are already suffering from addiction? Should the NFL and the players union be able to dictate the law? As reported in profootballtalk.nbcsports.com.

If receiver Josh Gordon has an addiction to marijuana, shouldn't he be treated as a person with a disease rather than just being a druggie? In theory, yes. As a practical matter, the NFL and NFLPA decided that the league should have the right to reach into a player’s bladder from time to time in order to police whether he has been smoking marijuana or taking other recreational substances that don’t enhance performance.

Fair or not, just or not, reasonable or not, the league and the union jointly decided long ago that the NFL would serve as the unofficial police force when it comes to the use of marijuana and other street drugs. So what if a player is in his own home, on his own time? The rules are they cannot use illicit drugs.

Let's face it - marijuana use in the NFL is rampant. Statistics ranging from 35% to 80% of current players admit to using marijuana. It is easy to use during the off-season, and even during the season and not get caught.

The challenge for the NFLPA will be to decide whether to attempt to secure relaxed standards regarding marijuana. The current collective bargaining agreement imposes a once-per-year test between April 20 and August 9 on players not in the program. It would be quite easy to avoid a positive test by players who want to smoke marijuana and who are able and willing to stop in the middle of March and quit until after their annual test has happened.

The NFL needs to decide whether or not to go after marijuana users - not just those caught by police while driving under the influence. Don't you think that a simpler solution would be to provide all athletes with a free online drug class that may prevent them from wanting to use marijuana in the first place?