Are you a fan of reality TV? If you are you know that it is almost impossible to find a reality star who is a good role model for children.  This is the seventh in a series of blogs exposing celebrity drug use.

Jonathan “Jo” Rivera – The baby daddy on the reality show Teen Mom 2, Rivera was arrested for possession of marijuana. Perhaps not surprisingly, his brother got a DUI in the same incident.

Marysol and Elsa Patton – Not to be outdone, these reality stars from Real Houswives of Miami, a mother-daughter duo, both were arrested for DUI. Nice that these two should get a minute in the limelight. Nice photo of mom. 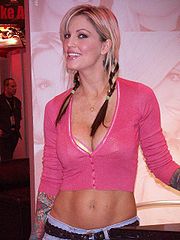 Janine Lindemulder – There are so many interesting incidents regarding this woman I can’t list them ion a small blog entry. She was a Playboy playmate. She was the cover girl on the Blink 182 album cover for Enema of the State. She is a drug addict and she was married to the man who cheated on Sandra Bullock. Her mug shot makes her look like she might be glad she was recently arrested for harassing the man who left Bullock, Jesse James.

All three of these need serious counseling combined with intensive 24 hour drug classes. I would hope not to see their names in the press again in the future.